Q&A with Mark Engebretson & Brian Lampkin of The Difficulties 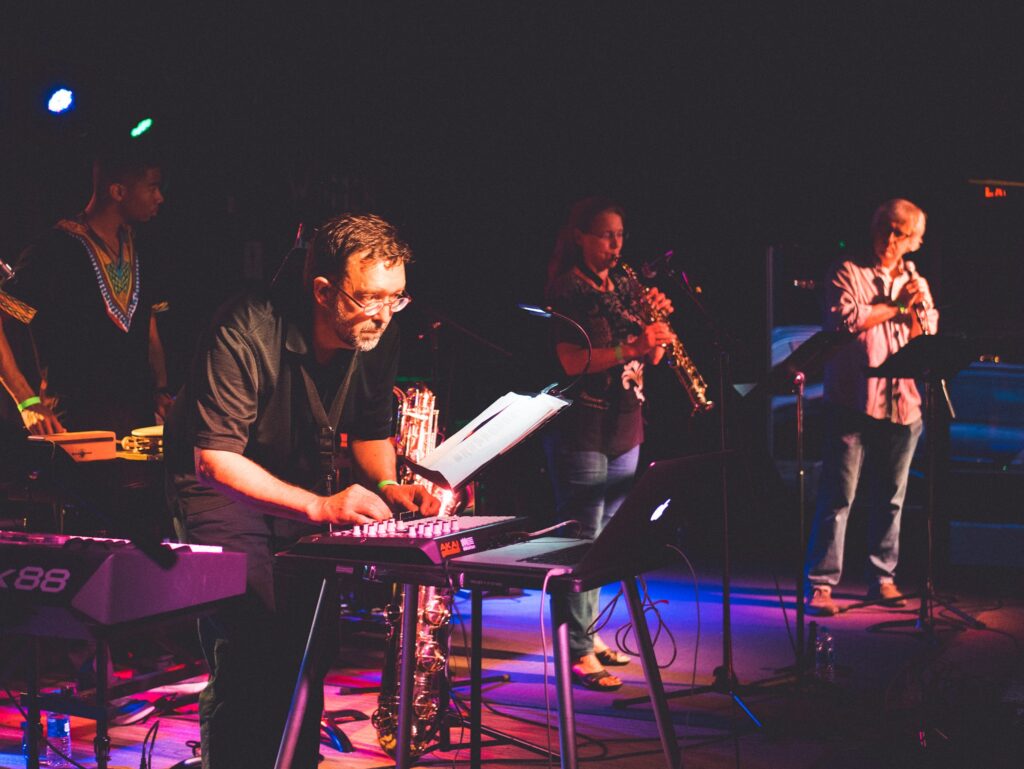 markengebretson · The Difficulties: I Don’t Want to be Stiff

The Difficulties will perform live on December 17th, 8:00 p.m. at The Crown at The Carolina in Greensboro. We asked ensemble members Brian Lampkin and Mark Engebretson to tell us a little about the group and themselves.

GreensboroArtsHub: Tell us about the history of The Difficulties. How did the ensemble come together?

Mark: Brian and I were asked, almost 10 years ago, to make a piece to perform as an opener to a screening of a movie called “The Trouble with being Human These Days.” This was a documentary about Holocaust survivor Zygmunt Baumann.

Brian: All true, but the first meeting of the band happened on the sidelines of our 9-year-old daughters’ soccer game. Somehow within minutes of meeting as odd parents at a soccer game we were talking about John Cage and Black Mountain College. To our daughters’ great embarrassment, I’m sure.

Mark: There is a kind of cheerfully dystopian angle to a lot of Brian’s poems (“There are difficulties. My wife left me, and I’m without cell phone…”). And the mess is often impacted by technology. This is funny, on the one hand, because so much of our work is relatively tech-heavy. I play “computer” in the band, after all (along with baritone saxophone)! And on the other hand, things really do go wrong, technologically, often enough for us, and everyone else. There are Difficulties, indeed!

GAH: Why the name?

Mark: Brian and I didn’t know anything about the movie, but we got together and talked about the idea, and the title. Brian wrote a piece in response called “The Difficulties”, which we’ll play at The Crown!

Brian: And make no mistake, we live up to the name.

GAH: What are your day jobs?

Mark: I’m not sure what Brian does (joking). I’m a music composition professor at UNCG. Susan Fancher is the world’s greatest soprano saxophonist (not joking!), and Eric Willie is a colleague teaching percussion at UNCG.

Brian: I’m also not sure what Brian does.

Mark: I do know what Brian does!!! He’s an owner of Scuppernong Books downtown.

GAH: Who else is in the ensemble?

Mark: We have our own sound person, Chris Miller. Chris teaches percussion, and also does a lot of arts management.

GAH: Brian writes the words, right? How does the music come together? Is it composed or improvised by the ensemble?

Mark: That’s right, Brian is our wordsmith. Each piece is different, really, but a lot of the arranging is done together with the band, people figuring out their parts. I usually bring some ideas of things they should do or play, and we start there and work through that. The pieces definitely evolve over time, and I even refreshed some of our older tunes for this show. I make all the sounds that come from the computer. A couple of pieces were not written by me, for example a new piece we’ll play at The Crown called “Not The End.” Brian wrote this beautiful, optimistic new poem. Susan arranged a piece using a couple of Celtic folk tunes to go around it. We’re really excited about that one.

Brian: It’s just like The Beatles in Get Back. Though no one brings us tea and toast.

GAH: At a performance at the Blind Tiger last year, you described your composition Jimmy Jazz as an ode to Greensboro. What inspired you to write Jimmy Jazz?

Brian: I was asked to submit a poem for a book on The Clash and “Jimmy Jazz” was the result. I love that it’s also a kind of walking tour of Greensboro addressing history, commerce, love, and violence.

GAH: Do you participate in any other performing groups?

Mark: I’m a member of the Red Clay Saxophone Quartet (along with Susan Fancher). Eric plays all over the place—orchestras, solos, chamber music, festivals.

Brian: My day job (I do have one) behind the counter at Scuppernong is an endless performance piece.

GAH: What were your musical influences?

Mark: I like to say John Cage, György Ligeti, Steve Reich. Cage, for me, defined the meaning of “music.” Ligeti, for “classical” music showed a path out of the musical modernism of the 20th century. And Reich is a great musician, whose discipline, commitment, and authenticity are inspirational. That said, I grew up listening to bands like Boston and Styx, and playing saxophone in both contemporary music and jazz/big bands. As a songwriter in a really weird small group, I really admire 21 Pilots.

Brian: The greatest compliment I’ve received in my Difficulties life was after a show at NCSU when a student said what four great musicians we were. There are three great musicians, to be clear. Another student said we sounded like The Red Hot Chili Peppers. We do not. For me, Laurie Anderson’s mix of words and sounds is a useful source.

GAH: What are you listening to now?

Mark: Jessie Montgomery. Terrific young composer, writing great music for strings. I also listen a lot to my students’ work, and to music they bring in. Many, for example, are inspired by gaming music, like the Legends of Zelda music.

GAH: Do you think about trying to elicit a response in your audience when composing or is it more a matter of self-expression?

Mark: OK, another influence was Witold Lutosławski, a Polish composer. He felt that you can’t know anything about what other people will like. But you can’t be so egotistical as to just make music for yourself. He conceived of a “primary listener” for whom the music was composed. Yes, in that end, that’s yourself, but “yourself as listener” as distinct from “yourself as composer.” I figure if I make something I can listen to myself, there is at least a shot that other people might like it, and I hope they do!

Brian: There’s something about the creation of art that requires a turn from the self to the world. I mine the interior space, no doubt, but the communication of that interior space is where interesting things happen.

GAH: What is your most memorable moment with The Difficulties?

Mark: Haha, maybe it was the time we planned to perform without Brian because he had a conflict. We figured out how to do a set without him…and then he came to the gig, anyway, but still didn’t perform because we were ready to go! I don’t know, I really love playing with the band. I love how strange it is, how beautiful and insightful Brian’s words are, what a great, great musician Susan is, how terrific Eric is…just playing with the group is always the best.

Brian: Maybe it was the time I tried to set the tempo for a piece and the musicians broke into laughter. I really am quite thrilled that we’re able to create these original, odd, and compelling songs. Without overstatement, it gives my life meaning.